It has been a banner year for the folks at Steelpointe Harbor and they’re ready to wave their true colors to prove it.  Recently, Bridgeport Landing Development officials hoisted banners up their new yacht club style flagpole just east of the new Lighthouse at Steelpointe Harbor Building.  There you’ll find the Stars and Stripes, State of Connecticut, City of Bridgeport and Steelpointe Harbor flags all unfurled on a post more representative of a ship’s mast than a typical flagpole. 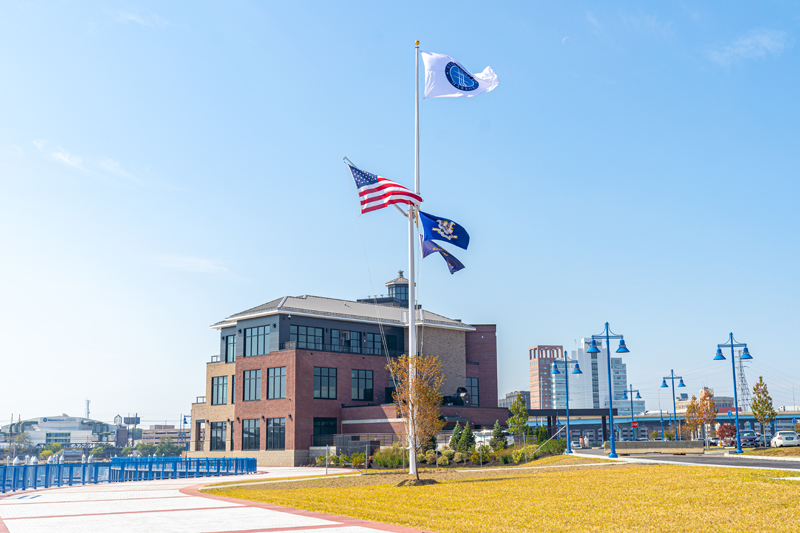 That distinction actually makes a difference, because on your typical single post flagpole flags are installed above each other with the American Flag at the top.  On what’s called a gaff-rigged pole, the gaff is the highest point of honor, and the upper masthead is where the club flies its banner with the American flag flown from the gaff. 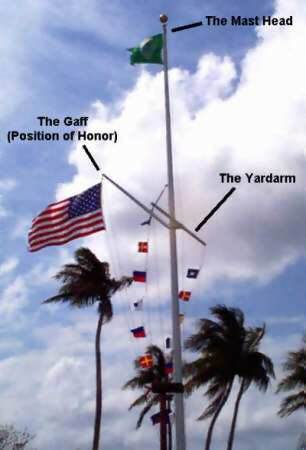 There are several sources that document the proper use of a gaff-rigged pole. The first source is the USPS booklet How to Fly Flags, Nautical Flag Display. This booklet was written in consultation with the U.S. Coast Guard, Coast Guard Auxiliary, New York Yacht Club and other yachting authorities.

“The gaff of a yacht-club-type flagpole is the highest point of honor, as is the gaff of the gaff-rigged vessel it simulates. The U.S. ensign alone is flown there. Although another flag may appear higher (at the truck of the mast), no flag is ever flown above the national ensign on the same halyard (except the worship pennant on naval ships).”

“The flagpole or mast of a yacht club is considered to represent the mast of a vessel, and the peak of the gaff, if one is used, is the place of honor from which the U.S. ensign is flown, just as if would be on a gaff rigged boat.”

There has been some confusion because proper flag etiquette requires no other flag to be flown above the U.S. ensign, and obviously another flag, such as a yacht club burgee at the masthead, will be higher than the U.S. flag when the latter is at the gaff. This is entirely proper because ‘above’ in flag etiquette, means ‘directly on top of. So next time you come by to visit please stop by to see our new gaff-rigged flagpole and banners as we honor the great symbol of our heritage.