What’s the economic impact of Steelpointe Harbor, the redevelopment of the East Side with Bass Pro Shops as the anchor tenant? It’s been a long elusive question that has never been fully rolled out publicly by city officials, perhaps because city-controlled parcels were acquired by the developer in stages. As progress continues OIB reached out to Economic Development Director Tom Gill and sat down for an hour-long chat with Steelpointe Harbor developers Robert Christoph Sr. and Robert Christoph Jr., principals of the Miami Beach-based RCI Marine Group and its related companies such as Bridgeport Landing Development, for an update on plans and a review of the associated financials. The project is now among the top 10 taxpayers in the city, according to a review of city tax assessment records. Property tax payments–about two thirds of which are returned to the district to cover infrastructure improvements–and personal property taxes combined for the budget year that started July 1 represent nearly $1.4 million. Tax payments will grow as the project builds out, according to the developers. 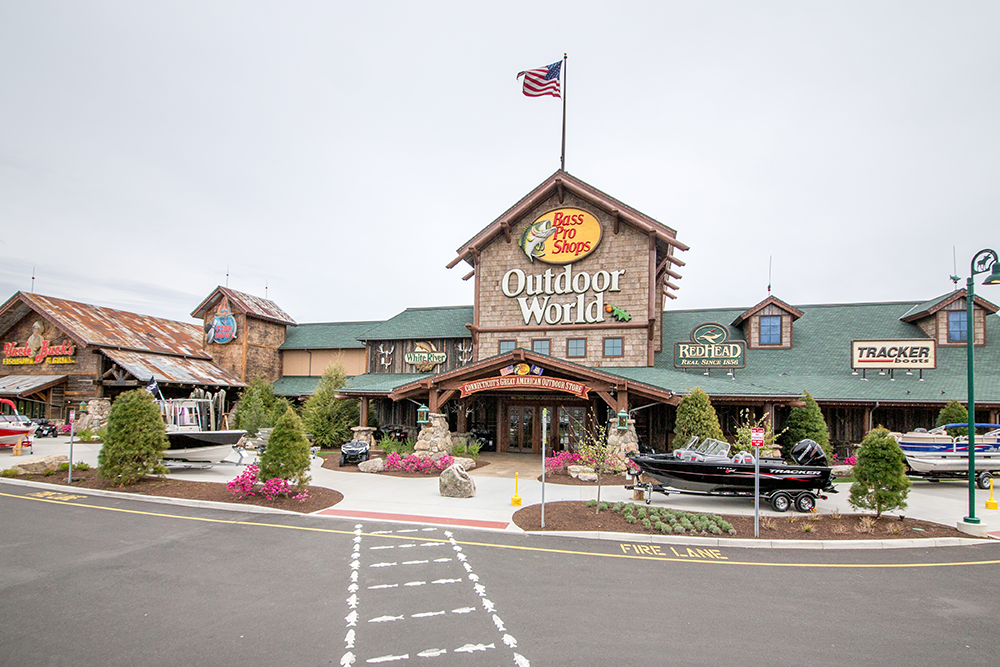 In discussions with city officials and the Christophs, key economic highlights follow:

–Property tax payments for current budget year $1.3 million (first payment due for July has been issued to the city). The number will grow with construction of the Dockmaster’s Building and upcoming residential component, with an additional 300 construction jobs over the next 18 months. Under the financing approved for the district, the city keeps first $400,000 of real estate property taxes annually and all personal property taxes. The  remaining tax receipts are given back to the district toward infrastructure costs.

–More than 250 permanent jobs, with more than half Bridgeport residents.

–More than $50 million combined investment of federal, state, local and private dollars for infrastructure improvements including street reconstruction, utilities, separate sanitary and storm sewers, environmental and construction of the bulkhead and harbor walk. More than half is private dollars invested by the Christophs’ company Bridgeport Landing Development.

– In May broke ground for the 35,000 square foot waterfront Dockmaster’s Building that will house a raw bar restaurant, retail and an engineering company accompanied by a harbor walk platform, marina and docks that Christoph Sr. estimates will be operational in about one year. The engineering firm BL Companies doing work on the site is expected to occupy 4,000 square feet of the building that will also serve as the headquarters for Bridgeport Landing.

– The site covers in total 52 acres including 44 buildable. The entire site is now controlled by the developers.

– The developers increased the height of the bulkhead, with six feet of clean fill,  following Federal Emergency Management Agency regulations in the aftermath of Hurricane Sandy. The entire shoreline area is now above the flood plain. 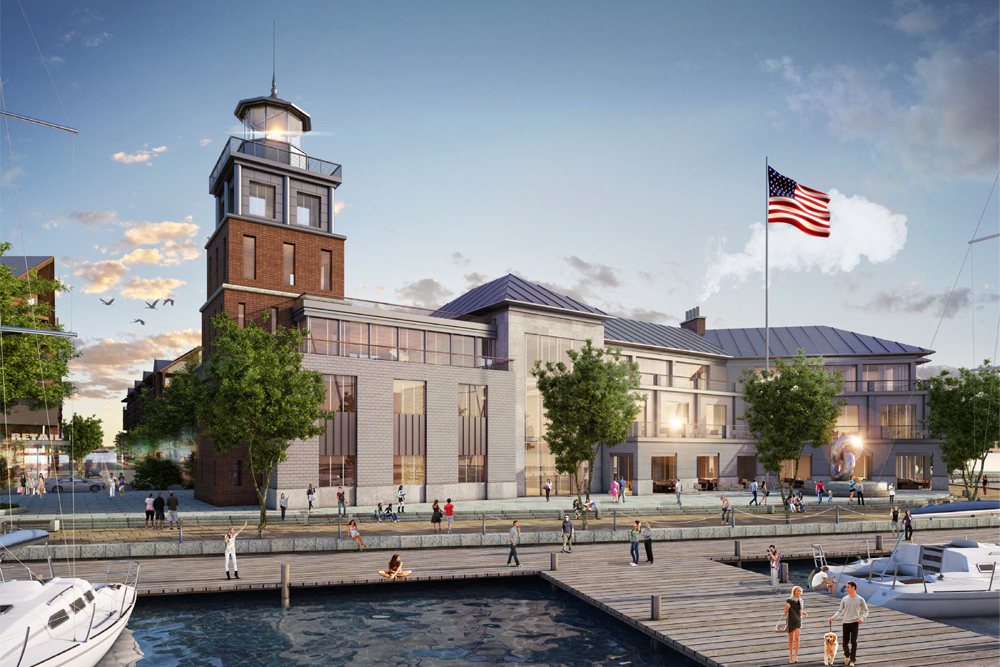 It’s been a long time coming powering through cynics but the vision of transforming a troubled area is now being realized. The redevelopment was first proposed about 35 years ago under the administration of Republican Mayor Lenny Paoletta. Nothing much happened on the site for more than a decade. In the mid 1990s under the first mayoral tenure of Joe Ganim, eminent domain initiatives and parcel purchases started the process for site clearance. The Christophs arrived on the scene as developers about 16 years ago. Over the ensuing years the city and developer worked through land disposition agreements that set forth land acquisitions, site clearance, remediation, bulkhead work and development timetable. The national economy tanked in 2008, once again slowing progress.

After decades of starts and stops, doubters abounded. City, state and federal officials announced millions in grants for infrastructure improvements. A major breakthrough came in the summer of 2012 when the mayoral administration of Bill Finch announced the site had hooked Bass Pro Shops, the mega outdoor retailer, for its first urban store featuring a marine theme. In the fall of 2015, the store opened, complemented by other tenants on the site such as Starbucks, Chipotle and T-Mobile, all with convenient I-95 access.

For the Christophs, who’ve developed waterfront projects up and down the East Coast, the time commitment and investment is finally paying off, for both the city and them as investors.

“In the future will we host regattas, fishing tournaments, boat shows enlivening the waterfront,” says Christoph Jr. A 2,600 foot harbor walk will eventually connect the development with Downtown, similar to a project they did along Miami Beach.

The success of projects must be assessed over time but tenant input, according to the Christophs, reveals business goals are being achieved with an emphasis on hiring local people. 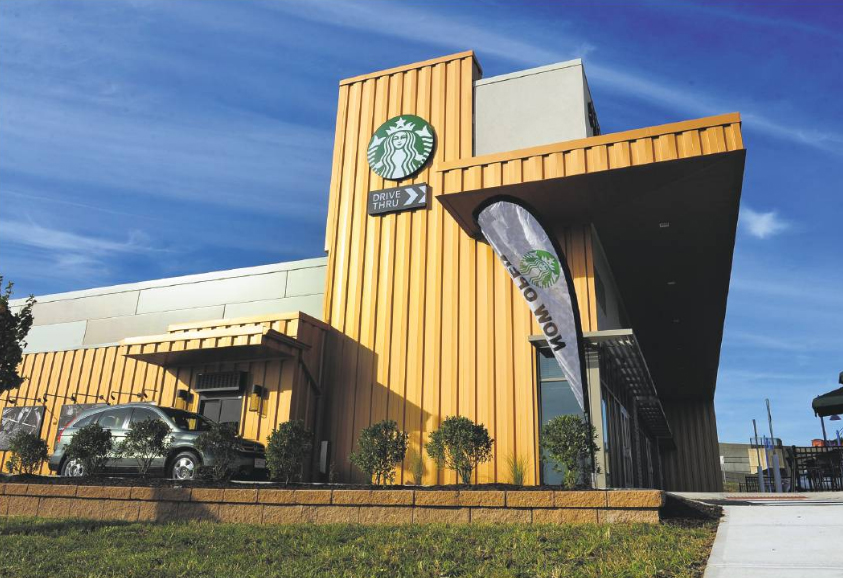 Starbucks was first tenant to open doors. T-Mobile and Chipotle also in row.

Christoph Sr. explained his interest in Bridgeport more than 15 years ago was all about location. “Bridgeport, from a waterfront perspective is unique,” he said. But so much of the waterfront was shut off to public access, something their vision for the site is transforming with construction of the Dockmaster and harbor walk. The developers have a unique bird’s eye view of their work perched on the 16th floor of 10 Middle Street Downtown peering across the waterfront.

Navigating an old industrial site that included a utility, the permitting process, economic downturns, multiple mayoral administrations has been an exercise in patience and resilience. But now they say all the components are coming together and that includes the expected groundbreaking this fall for 180 units of housing, in the first phase of a residential component. And calls are coming from Fairfield County gold coast towns such as Westport inquiring about the development and residential piece.

“It’s all positive,” says Christoph Jr. “We are excited where we are and for the future. We are here for the long haul.” 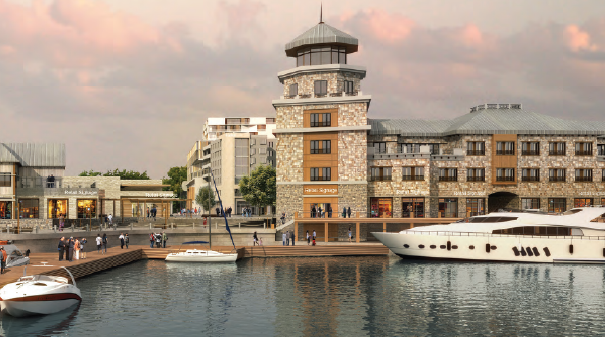