Part 2 of a series following the growth of an oyster

In July, Oyster farmers Charles Viens of Charles Island Oyster Farm L.L.C and Ben Goetsch of Briarpatch Enterprises Inc. displayed the two million young oysters that were being grown on a dock on the Yellow Mill Channel and discussed the economic and environmental benefits of oyster farming in Bridgeport. 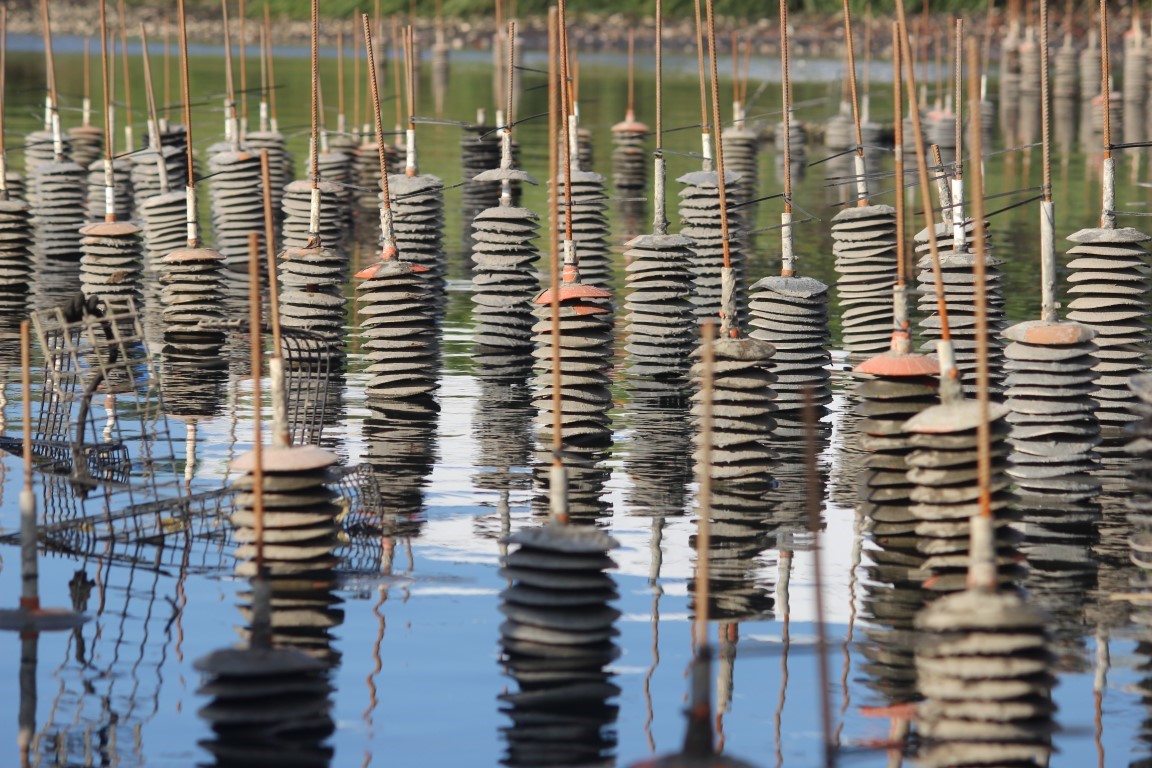 More than a month later on a warm August morning, the tide of the Yellow Mill Channel slowly rises over hundreds of plastic discs embedded within the floor of the river. These stacked discs, named for their unique shape, are often called “Chinese Hats”. These hats are the base onto which naturally spawning oyster larvae commonly called “spat”, attach themselves. From there, oysters are put in an upweller, which is a floating dock circulating water to bins full of young oysters to ensure consistent feeding. This season, Viens expects about 2 million offspring to attach themselves to the hundreds of hats deployed in the Yellow Mill Channel.

The hats are coated with a cement-like mixture that oyster spat latches on to. Once the hats are coated in cement they are shaken to remove any excess cement. After this process is completed the hats must be left to dry for about two days. Once a spot is chosen for planting, a 4ft long half inch diameter metal rod is tapped into the ground. Then 20 cement coated hats slide right over the rod already in the water. As the tide rises the hats will become completely submerged under water. Goetsch and Viens both use this method however, the hats at this Bridgeport location belong exclusively to Viens.

This farming process is not only new to Bridgeport, but also new to Connecticut. Viens has been pioneering this oyster farming method along the Yellow Mill. Viens was the first one to do it in 2015 and now other companies are looking into utilizing this process as well. 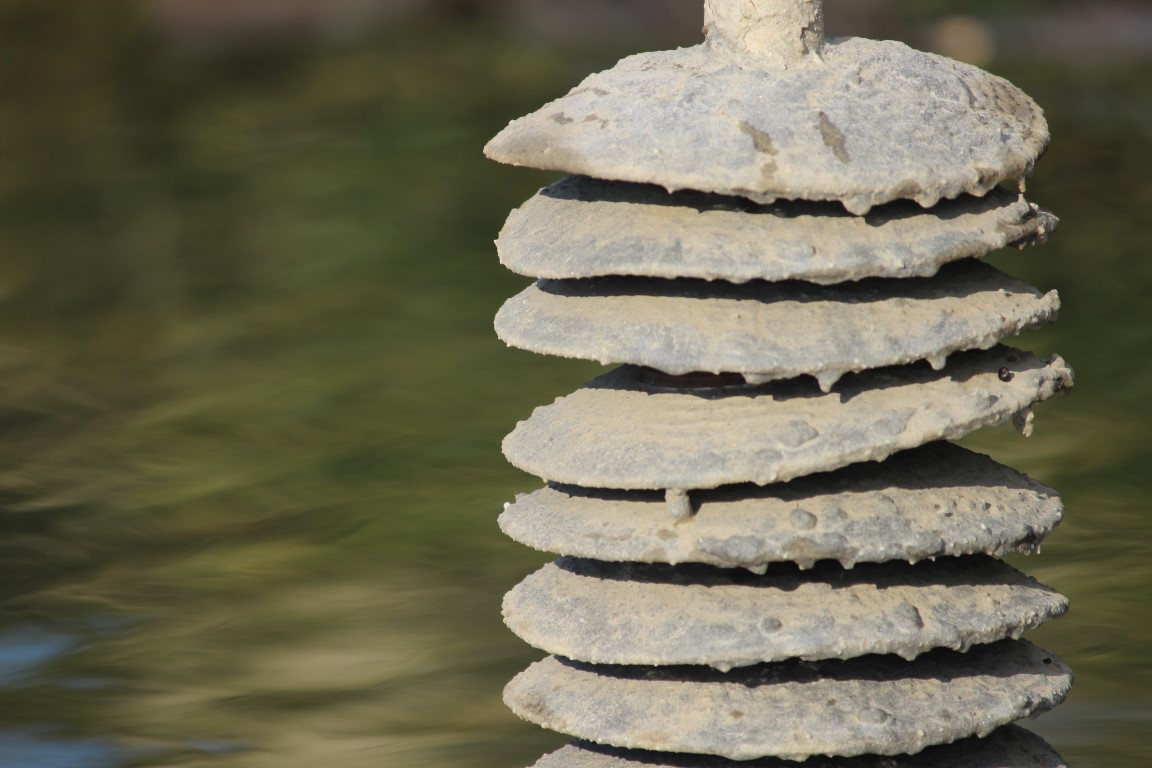 A close look at the cement covered plastic discs

The oyster spat is being produced from young oysters a short distance away upriver. In the Bridgeport area, oysters will begin mating naturally in late August once the water reaches a certain temperature. After the oyster spat have had time to attach to the hats and settle, they are removed from the water. The hat is then held over a box or tarp and tapped to remove the baby oysters. Since the plastic disc itself is flexible, the cement and oysters fall off easily. Once the oysters have been removed from the hats, any remaining cement is removed. Viens utilizes a large stainless metal tumbler, to clean the oysters and remove excess cement.

The tumbler is not only used to break excess cement off of the oysters, it is also used to clean the oysters that are in the process of growing. 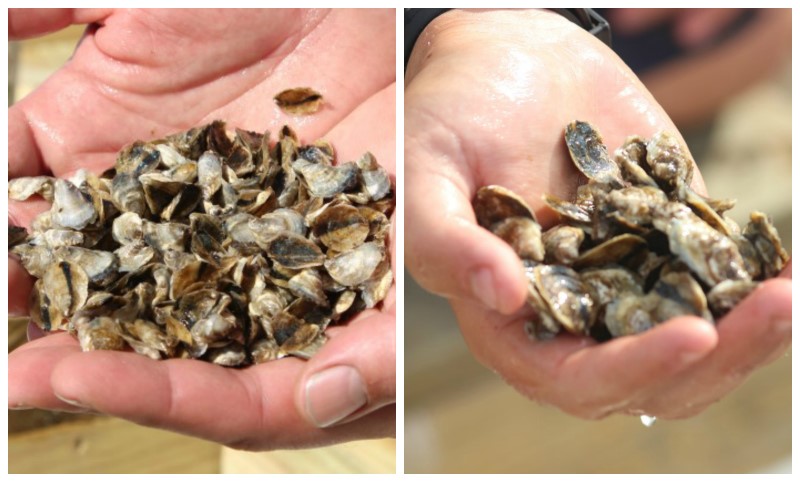 The oysters we visited a month ago have already grown an additional inch and will soon be relocated to larger oyster beds elsewhere in the Long Island Sound. We will catchup with Goetsch and Viens again to follow the oysters as they are relocated to offshore beds in November to finish their growth. 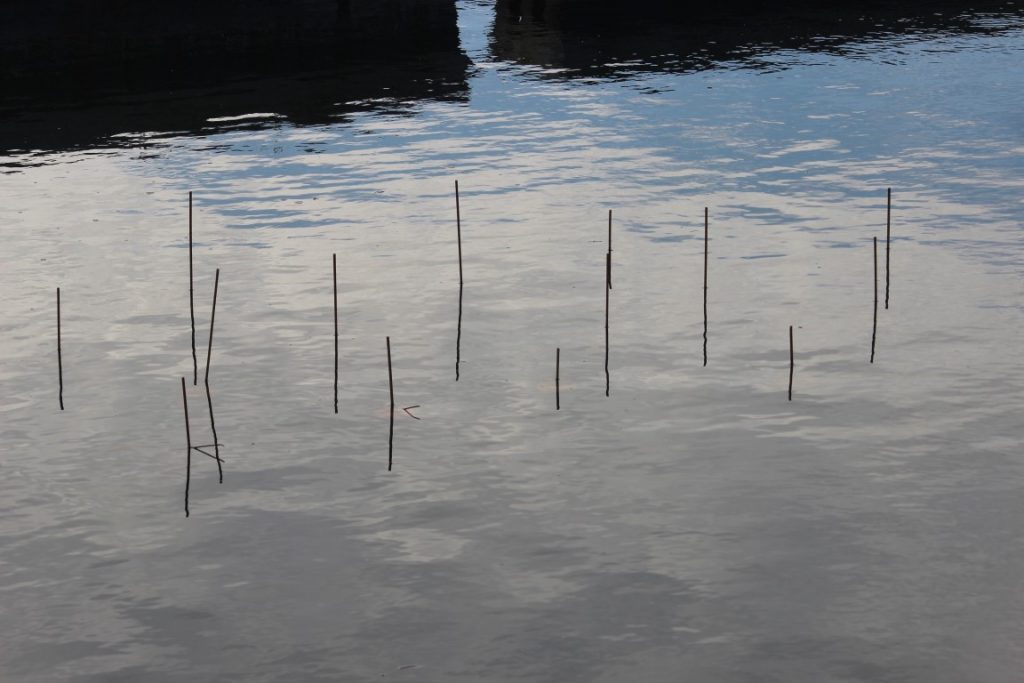